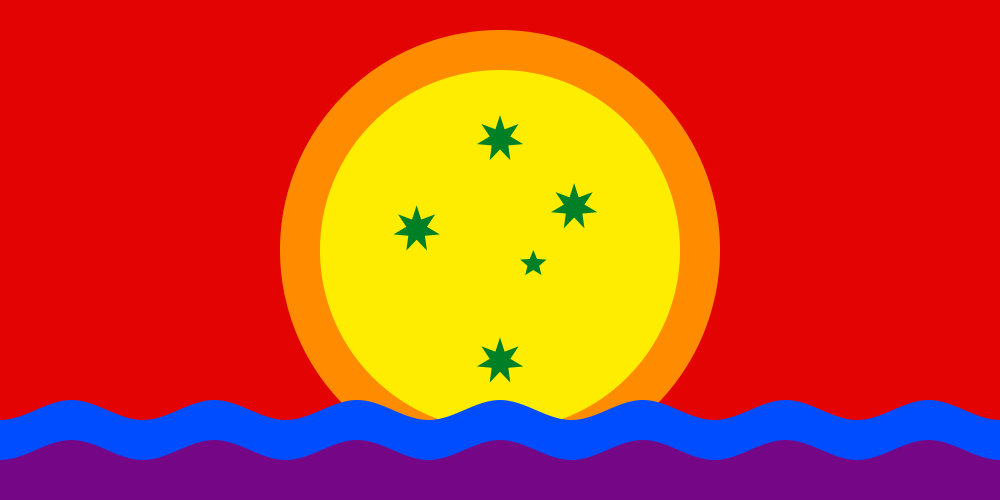 Following the collapse of Australian Society with the failure of The Great Red Kangaroo Leap Forward Cultural Revolution by the Chinese controlled ‘democratic’ government.

Soon a homeland was established from which surfers of military age swear war on the un-washed non surfing helotry in perpetuity,

A constitutional monarchy, parliamentary monarchy, or democratic monarchy is a form of monarchy in which the monarch exercises their authority in accordance with a constitution and is not alone in decision making. Constitutional monarchies differ from absolute monarchies (in which a monarch whether limited by a constitution or not is the only one to decide) in that they are bound to exercise powers and authorities within limits prescribed by an established legal framework

Captain Goodvibes started life as a pork chop, mutated by a chance nuclear plant explosion. According to The Encyclopedia of Surfing, Goodvibes is a "hard-drinking, drug-taking, straight-talking pig with a tunnel-shaped snout. 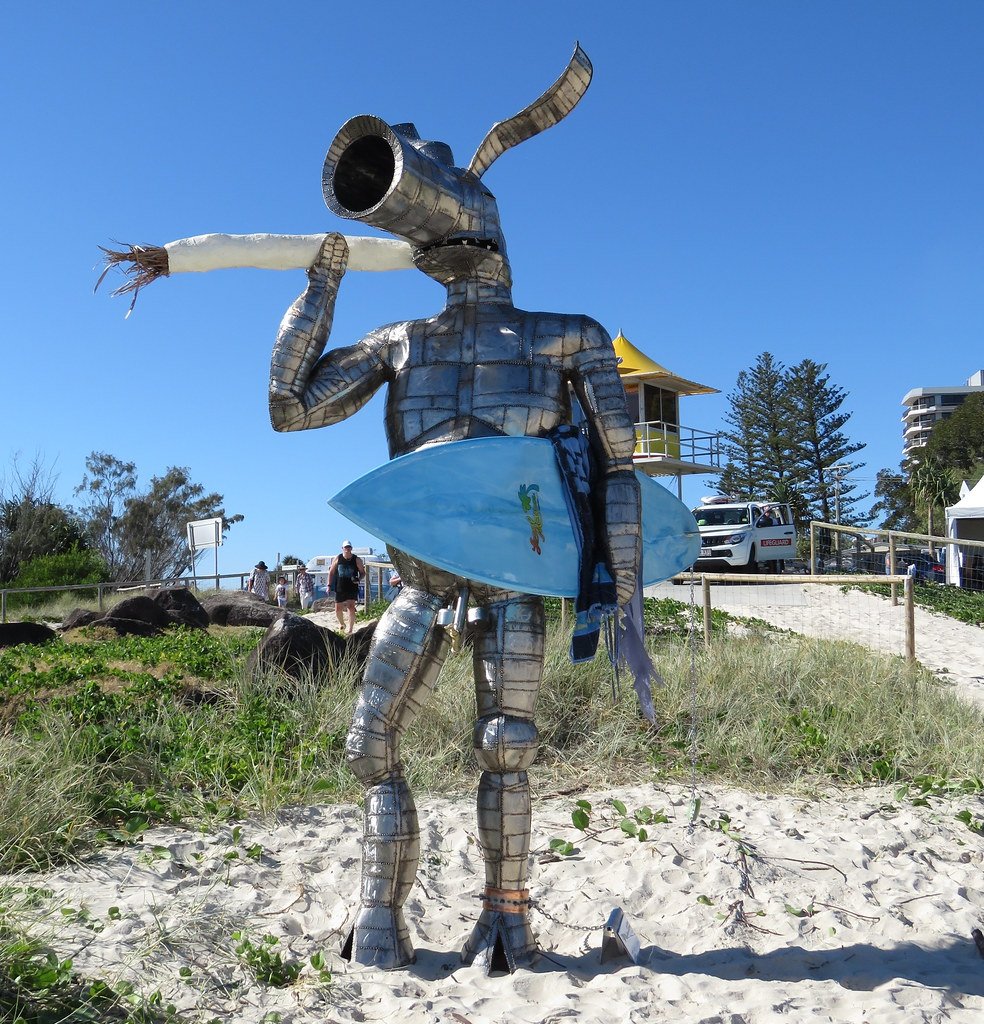 After the Constitution of the Oceanic Domain of ANZAC was drafted in 2041 certain basic principles were established by the Founding Non Gender Specific Metaphorical Birth humans.

To carve out a place in the sun with endless surf

Realpolitik (German: [ʁeˈaːlpoliˌtiːk]; from German real 'realistic, practical, actual', and Politik 'politics') refers to enacting or engaging in diplomatic or political policies based primarily on considerations of given circumstances and factors, rather than strictly binding itself to explicit ideological notions or moral and ethical premises. In this respect, it shares aspects of its philosophical approach with those of realism and pragmatism. It is often simply referred to as pragmatism in politics, e.g. "pursuing pragmatic policies" or "realistic policies".

According to Kenneth Waltz, there are three requirements for successful nuclear deterrence:

In nuclear strategy, minimal deterrence, also known as minimum deterrence and finite deterrence, is an application of deterrence theory in which a state possesses no more nuclear weapons than is necessary to deter an adversary from attacking. Pure minimal deterrence is a doctrine of no first use, holding that the only mission of nuclear weapons is to deter a nuclear adversary by making the cost of a first strike unacceptably high. To present a credible deterrent, there must be the assurance that any attack would trigger a retaliatory strike. In other words, minimal deterrence requires rejecting a counterforce strategy in favor of pursuing survivable force that can be used in a countervalue second strike.

Minimal deterrence represents one way of solving the security dilemma and avoiding an arms race. Decision-makers often feel pressured to expand their arsenals when they perceive them to be vulnerable to an adversary's first strike, especially when both sides seek to achieve the advantage. Eliminating this perceived vulnerability reduces the incentive to produce more and advanced weapons.

Nuclear peace is a theory of international relations which argues that the presence of nuclear weapons may in some circumstances decrease the risk of crisis escalation, since parties will seek to avoid situations that could lead to the use of nuclear weapons. Proponents of nuclear peace theory therefore believe that controlled nuclear proliferation may be beneficial for global stability.

A nuclear peace results if the costs of war are unacceptably high for both sides. In a two-sided conflict in which both sides have a second-strike capability, defense becomes impossible and so it is the very prospect of fighting the war, rather than the possibility of losing it, that induces restraint.

In a condition of mutually assured destruction, there are civilian "hostages" on both sides, which facilitates cooperation by acting as an informal mechanism of contract enforcement between states.

In nuclear ethics and deterrence theory, No first use (NFU) refers to a type of pledge or policy wherein a nuclear power formally refrains from the use of nuclear weapons or other weapons of mass destruction in warfare, except for as a second strike in retaliation to an attack by an enemy power using WMDs. Such a pledge would allow for a unique state of affairs in which a given nuclear power can be engaged in a conflict of conventional weaponry while it purposefully foregoes any of the strategic advantages of nuclear weapons, provided the enemy power does not possess or utilize any such weapons of their own. The concept is primarily invoked in reference to nuclear mutually assured destruction but has also been applied to chemical and biological warfare

In politics (and particularly in international politics), soft power is the ability to co-opt rather than coerce (contrast hard power). In other words, soft power involves shaping the preferences of others through appeal and attraction. A defining feature of soft power is that it is non-coercive; the currency of soft power includes culture, political values, and foreign policies. In 2012, Joseph Nye of Harvard University explained that with soft power, "the best propaganda is not propaganda", further explaining that during the Information Age, "credibility is the scarcest resource".

Having the ability to influence the behaviour or thinking of others through the power of attraction and ideas is also vital to our foreign policy. This is known as soft power.

Among these are our democracy, multicultural society, strong economy, attractive lifestyle and world-class institutions. At the same time, globalisation and technological advances, particularly the reach of the internet and social media, continue to change the way influence is exercised.

Digital communication also allows non-government actors and nation states alike to influence public attitudes at a pace and scale not witnessed before, for good and ill.

Our widely envied lifestyle reflects the high standard of living we have forged and the excellence of our cities and government services, as well as world-leading levels of environmental protection. We have strengths in innovation and the creative industries. Our attractiveness as a tourism destination brings substantial economic benefits and builds influence by encouraging visitors to our shores and showcasing our natural beauty, world-class produce, dynamic economy and the openness of our society.

The Government is committed to marketing our commercial, educational and cultural credentials. We will develop a stronger nation brand that reinforces our reputation as an internationally competitive investment destination, a great place to visit, a quality provider of education and a trusted exporter of premium quality goods and services. This will complement our broader trade and investment policies and add impetus to our major economic partnerships.