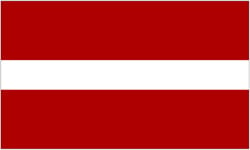 "For Fatherland and Freedom"

Latvia V2 is a nation led by President Egils Levits on the continent of Europe. Latvia V2's government is a Parliamentary Republic with very moderate social policies. Economically, Latvia V2 favors far left wing policies. The official currency of Latvia V2 is the Euro. At 107 days old, Latvia V2 is a mature nation. Latvia V2 has a population of 393,916 and a land area of 3,180.00 sq. miles. This gives it a national average population density of 123.87. Pollution in the nation is everywhere. The citizens' faith in the government is completely depleted with an approval rating of 0%.

Latvia, officially known as the Republic of Latvia, is a country in the Baltic region of Northern Europe. It is one of the Baltic states; and is bordered by Estonia to the north, Lithuania to the south, Russia to the east, Belarus to the southeast, and shares a maritime border with Sweden to the west. Latvia covers an area of 64,589 km2 (24,938 sq mi), with a population of 1.9 million. The country has a temperate seasonal climate. Its capital and largest city is Riga. Latvians belong to the ethnolinguistic group of the Balts; and speak Latvian, one of the only two surviving Baltic languages. Russians are a prominent minority in the country, at some 24% of the population.