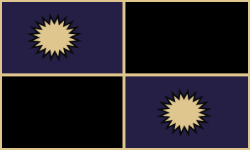 Aphol is a nation led by Lord Lumis on the continent of Asia. Aphol's government is a Anarchy with very conservative social policies. Economically, Aphol favors left wing policies. The official currency of Aphol is the Dollar. At 203 days old, Aphol is an old nation. Aphol has a population of 313,504 and a land area of 4,300.00 sq. miles. This gives it a national average population density of 72.91. Pollution in the nation is a disaster. The citizens' faith in the government is completely depleted with an approval rating of 0%.

Goals for the Nation

I would like to keep a friendly standing with most nations as I am trying to come up as a Trading Nation that sells materials for a low price. If you want to have the opportunity to buy materials lower than the average nation selling then I  am happy to comply with that but if not, you will be embargoed if you start a war or even the act of espionage against my nation.

As for trading goes, I am a small nation at the moment so I have fewer resources than the average nation but I will still sell what I have lower than the price per unit. I occasionally sell oil and iron but I mostly just sell oil as it's my most profitable and the most I am making at the moment. I sell 200 units of oil at the moment and the reason why it's 200 is because I still need to keep some for my nation but once I start making more then I'll change it but until then it's 200. I Sell around 4-6pm EST, I don't know if you would care about that but I'm just saying that time so I can wait until my nation makes more production of oil.