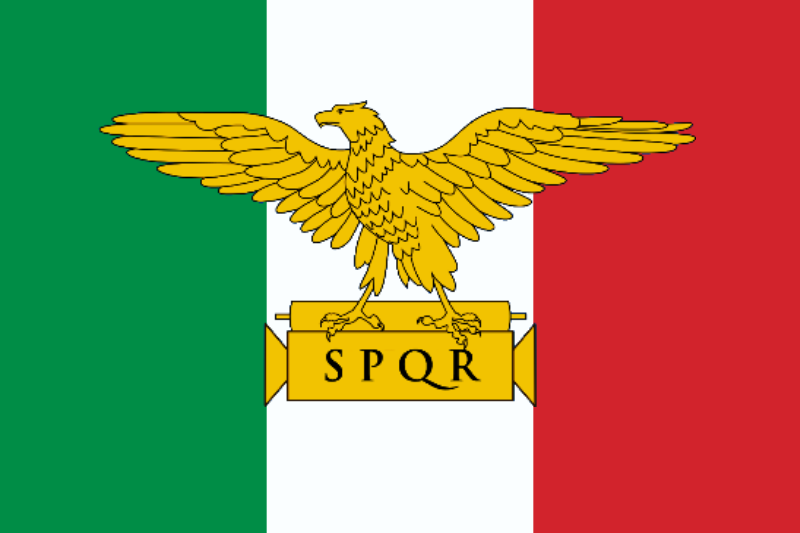 The Reign of Laitia, ruled by the Consul Francesco III.

The great kingdom of Laitia rises on the lands that once hosted the great Roman Empire, Rome, its capital, is the fruit of technology and great culture.
Laitia enjoys great resources and civilization, it is the task of the great army to protect these precious lands and repel the barbarians from the stolen provinces with subterfuges and deceptions.
The hymn of the great Roman Empire resounds loudly over the entire kingdom of Laitia, heartening the Laitians and scaring the invaders.

Laitia is a republic with aristocratic, democratic and monarchical features.
Absolute power is held by the Consul, who has absolute and indisputable power, the Consul is chosen at the death of the previous one by certain authoritative families.
The council chamber is made up of 35 elderly, ex-deputies over the age of 65, who hold the legislative power and act as a council body for the Consul, the council chamber can also choose the houses that will present a candidate to Consul, these families must pay a share to the chamber every year to be considered authoritative, the higher the share, the more favored they will be.
Finally, there is the chamber of deputies, made up of 120 deputies, made up of scholars over the age of 30, the chamber of deputies has executive power and judiciary power, all graduates over 30 years of age can be candidates for deputies, after 35 years it is possible to receive from the Consul the appointment as elder and enter the council chamber.

The great kingdom of Laitia is commanded by Consul Francesco III, he guides Laitia with an iron fist and cunning, endowed with great culture and cunning.
Up to now there have been 7 consuls:
-Consul Lucio ruled from 1945 until 1960, in this period he laid the foundations of the government and the most important laws, he died of a heart attack at the age of 82.
-Consul Marcus ruled from 1960 until 1987, famous for having built large public monuments, he died of old age.
-Consul Francesco I, he ruled from 1987 until 1988, unfortunately he ruled for a few months due to a serious illness that led to his death shortly after.
-Consul Arturo,also know as Magno, he ruled from 1988 until 2010, he reinforced the ranks of the army and started various land reclamations, he was murdered by a group of political extremists in his villa while he was sleeping.
-Consul Francesco II, he ruled from 2010 until 2048, famous for his punitive campaigns against neighboring countries, died in the battle of Campania at the head of his army.
-Consul Lucio II, also known as Lucifer, ruled from 2048 until 2070, so nicknamed for his great cruelty, violence and his aggressive foreign policy, he died assassinated by his son Francesco.
-Consul Francesco III known as the Savior, has ruled since 2070, famous for having freed the people from the oppressive figure of Consul Lucio II