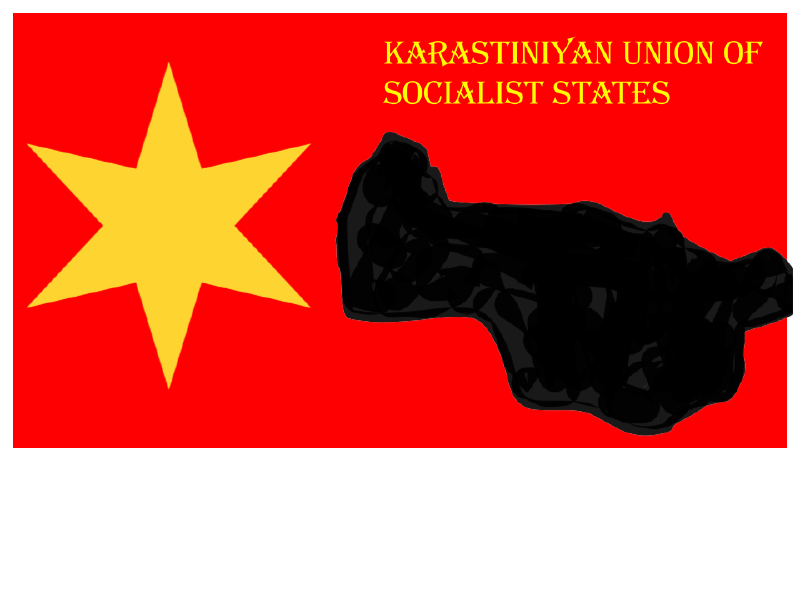 "Amog us is bes gam"

Hello and welcome to the Socialist Republic of Karastiniya. I, Premier Pastiesky Gorbaslav hope you have a great visit! Here are some more information.

After the collapse of the tyrranical Novgorodian Empire, its empire fractured into many smaller countries. We Karastiniyans had enough of foreign rule. I was lucky enough to have the support of my people to establish a new country, the country you are reading about right now.

June 2072 - September 2072: During this time period, Our country was industrializing at a rapid rate. Soon however, the country of Iromai invaded us. We were outnumbered 70:1. There was no way of winning. Spoiler, it was a disaster. Thousands died, millions of money was lost, and the countries was in ruins. From that day on, I learned that I needed to increase my military size.

Because of radiation and lack of resources, we were forced to migrate from Asia to Europe. Also I realized that radiation is making food shortages, plus food is very cheap, therefore I decided to destroy all farms and obtain food through trade. I replaced these farms with coal mines and lead mines, since we hadn't had them in Asia.

Not much happened in this time frame, since everything is becoming more expensive. I occasionally bought more improvements and bought a new city.

The premise of this plan is to develop my country economically as much as possible by spending lots of improvements on business buildings such as shopping malls. My average commerce rate so far is around 50% per city.

We have stayed in peace for with no war and continued to develop our nation.

The Premier Robbotrar Petrov has went on vacation for a long time. However, it had been 6 years before news of what happened to Petrov has been received by the Secretary of State, Polutin Vladimir. Because of how long Petrov was gone, anarchy sprang up throughout Karastiniya. Coup De Tats and other unfortunate events followed. Because of this, neighboring countries have exploited this and took land from us.

After the return of Robbotrar Petrov from his vacation, he apologized to his citizens, and now that order is restored and the rebellions are crushed, we can now move forward to make Karastiniya prosperous once more.

After Robbotrar Petrov returns from his 6 year vacation, he becomes more and more paranoid and so makes more and more authoritarian laws to secure his control of Premier. The parliament is weakened, Robbotrar now represents 60 percent of the votes (66 percent is required to pass a law), so essentially Robbotrar has full control over foreign decisions and internal affairs.Also, more communist laws are passed to increase stability in the country to satisfy the people.

The increased tax rate's affects mandated by Petrov on the country are being seen. Many people are starving or dying from diseases. This immensely affects the stability of the country and the reputation of Petrov. However, part of this can be blamed on the anarchy that happened in Karastiniya while Petrov was gone. There are rumors that some politicians in Petrov's government are scheming to take overthrow him because of his ineffective leadership.

Furious at the incompetance of the Military High Command at winning against its enemies, the Head of the Army was replaced with a new leader, Oigarky Foluvski and in addition, a policy of the mass conversion of buildings to factory was  created.

After the failures of the tanks at the expense lots of steel, Petrov has decided to switch production to barracks since it is cheaper and more effective.

Description: Petrov has seen both the benefits and the downsides of Gorbaslav's economic developmental focused economic policy. However, there is its flaws. For example, when war comes arounds, it is harder to win battles because there is not enough troops. As a result, many commercial buildings are going to be converted into war-beneficial buildings like steel mills. From now on, building war related things will be a priority over commerce buildings. The average commerce buildings per new city will now only be 40%.

AFTER YEARS OF PEACE, PASTIESKY GORBASLAV OUR BELOVED PREMIER HAS DIED. WE WILL HOLD A GRAND CEREMONY TODAY, DECEMBER 21, 2075, AND CELEBRATE HIS DEATH EVERY YEAR FROM NOW ON THIS DATE. WE WILL NEVER FORGET HIS CONTRIBUTIONS TO LIFE IN KARISTINIYA. NEXT YEAR, ON JANURARY 1-20, WE, THE MINISTERS AND MILITARY HIGH COMMAND WILL ELECT OUR NEW LEADER, THAT WILL CONTINUE THE LEGACY OF THE GREAT LEADER PASTIESKY GORBASLAV.

THOUGH ORIGINALLY PLANNED TO HAPPEN IN JANUARY ,  BECAUSE OF INTERNAL SQUABBLING AND THE ASSASINATION AND SHADY PLOT TO KILL POTENTIAL LEADERS. IN ADDITION, MANY CABINET MEMBERS HAVE BEEN FIRED OR DETAINED. THE NEW PREMIER OF KARASTINIYA HAS BEEN DECIDED TO BE ROBBATRAR PETROV, PREVIOUS MINISTER OF PROPOGANDA.

Head of the Army: General Foluvski

Head of the Navy: Admiral Gamer