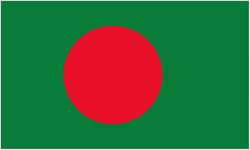 Bangladesh is a densely populated, low-lying, mainly riverine country located in South Asia with a coastline of 580 km (360 mi) on the northern littoral of the Bay of Bengal. The delta plain of the Ganges (Padma), Brahmaputra (Jamuna), and Meghna Rivers and their tributaries occupy 79 percent of the country. Four uplifted blocks (including the Madhupur and Barind Tracts in the center and northwest) occupy 9 percent and steep hill ranges up to approximately 1,000 meters (3,300 ft) high occupy 12 percent in the southeast (the Chittagong Hill Tracts) and in the northeast. Straddling the Tropic of Cancer, Bangladesh has a tropical monsoon climate characterized by heavy seasonal rainfall, high temperatures, and high humidity. Natural disasters such as floods and cyclones accompanied by storm surges periodically affect the country. Most of the country is intensively farmed, with rice the main crop, grown in three seasons. Rapid urbanization is taking place with associated industrial and commercial development. Exports of garments and shrimp plus remittances from Bangladeshis working abroad provide the country's three main sources of foreign exchange income.