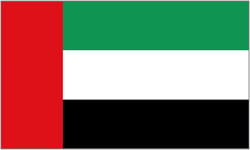 The UAE is an elective monarchy formed from a federation of seven emirates, consisting of Abu Dhabi (which serves as the capital), Ajman, Dubai, Fujairah, Ras Al Khaimah, Sharjah and Umm Al Quwain.[10] Each emirate is governed by a Sheikh and, together, they form the Federal Supreme Council; one of them serves as President of the United Arab Emirates.[11] In 2013, the UAE's population was 9.2 million, of which 1.4 million were Emirati citizens and 7.8 million were expatriates;[12][13][14] the estimated population in 2020 was 9.89 million.[15]

Islam is the official religion and Arabic is the official language. The UAE's oil and natural gas reserves are the sixth- and seventh-largest in the world, respectively.[16][17] Zayed bin Sultan Al Nahyan, ruler of Abu Dhabi and the country's first president, oversaw the development of the Emirates by investing oil revenues into healthcare, education, and infrastructure.[18] The UAE's economy is the most diversified of all the members of the Gulf Cooperation Council, while its most populous city, Dubai, is a global city and international hub.[19][20] The country has become less reliant on oil and gas, and is economically focusing on tourism and business. The UAE government does not levy income tax, although there is a system of corporate tax in place and value-added tax at 5% was established in 2018.[21]

The UAE is recognised as a regional and a middle power.[22][23] The UAE is a member of the United Nations, the Arab League, the Organisation of Islamic Cooperation, OPEC, the Non-Aligned Movement, and the Gulf Cooperation Council.