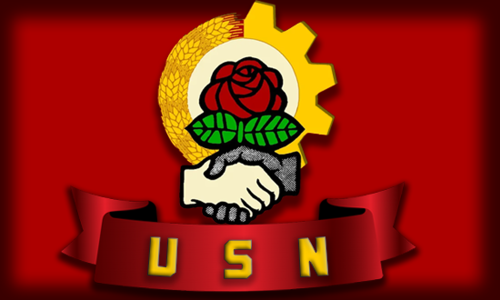 Over 500 years ago, Vaco was founded by a great tribe called the Griffin-Ryder. They ruled all of what was modern day Vaco. But they were cruel and repressive. Almost every, there were secret police called The Protection Bureau who job was to track and kill all those who oppose the monarchy. The Feudal Empire of Astana-Anders was created and ruled for over 100 years. Then, 20 years later, an intellectual by the name of Dimitri Castro came into the spotlight. Dimitri was a poor man who grew up in a broken household with his father being missing for most of his life. His mother saw how broken and sad her son was and soon began teaching Dimitri about philosophy, poetry, literature, music, art, writing, acting, history, and most importantly politics. He had heard tales of things called republics and democracies where the individual had more power than anything at home was. This made him into a man who was both warm and great listener and conversationalist but also deeply complex and passionate man who saw the idea of monarchies as wrong and outdated. Then the current king at that time, King George Griffin-Ryder announced that the poor would be taxed heavily again this year. This angered Dimitri to the point where he and his friend Joseph Sasayama created a secret political party called The Sunrise Movement, a left-wing, social democratic party whom main goal was to abolish the monarchy in a peaceful manner. They passed leaflets, made speeches in beerhalls and anywhere the P.B wasn't going to catch them, and asked other people from all over the globe to ask for support in for their cause. 1 month later, Joseph was killed after it was uncovered that he was plotting to kill the king. The police then arrested Dimitri. Many people then openly protested against this with a large majority of the protestors being women, gays, and other minority groups who the government didn't give full rights to. Then he met another revolutionary named Avery Tari Harper who just like Dimitri grew up in a poor family and soon became an intellectual due to her mother and also wanted to abolish the monarchy and instead wanted a progressive society. 5 months later, Dimitri then decided that a revolution must be staged into to save the people after King George lost a war with the country of Vaco after grossly underestimating the republic. After that public approval of the king hit an all time low. On April 6th, a bomb went off in the capital of Omni. There, armed civilians rose up. The army tried to repress the rebels but couldn't do to the war. After 4 weeks of street and countryside fighting. The rebels captured the capital of Omni and killed the king with a gunshot to the head. After his death, Dimitri declared the Empire dissolved and instead replace with a parliamentary republic in which the Lord President would be the only and supreme authority in the executive branch. The Citizens Parliament was a unicameral legislature which made created laws. The Judicial branch was made up of 12 Lord Magistrates and could overrule laws with reason. The Lord President could veto a bill and parliament couldn't do anything about unless the courts overruled the veto. The Lord President could sign and propose laws but couldn't vote on them. The Lord President could also ask parliament to declare war and if parliament said yes then the Lord President would be commander of the armed forces. During times of peace, parliament controlled the military. Vaco national animal is the fox because the fox represents the symbol of Equality and Intelligence, two things Astana-Anders prides itself on. The motto "Aequalitatem, Freedom, Atque Procursu" means in Vacovian "Equality, Freedom, and Progress." The fundamental core beliefs of Vaco.