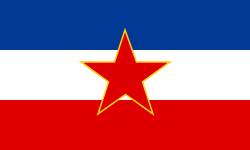 The Socialist Federal Republic of Jugoslavia (SFRJ) was created through the aftermath of WW2 when the Germans got kicked out the Western Balkans by the Jugoslav partisans. Now that Jugoslavia had it sovereignty restored the question was who would rule the monarchists who had fled, the democrats who had fled or the partisans which stayed fought and liberated Jugoslavia? The answer was obvious as Tito had the support of the Allies, Soviets, and the people. On the 29th of November, 1945 The Federal Peoples Republic of Jugoslavia was proclaimed with a popular vote of 85%. During the post WW2 period Jugoslavia saw rapid development and improvement with very little cost, it also saw the expansion of it territory, encompassing former Italian lands in the province of Istara and had a bit of the city of Trieste. Not all was fine though as Tito had a lot of disagreements with Stalin which eventual led to the split up of Jugoslavia and the Soviet Union, known as the Tito-Stalin Split.